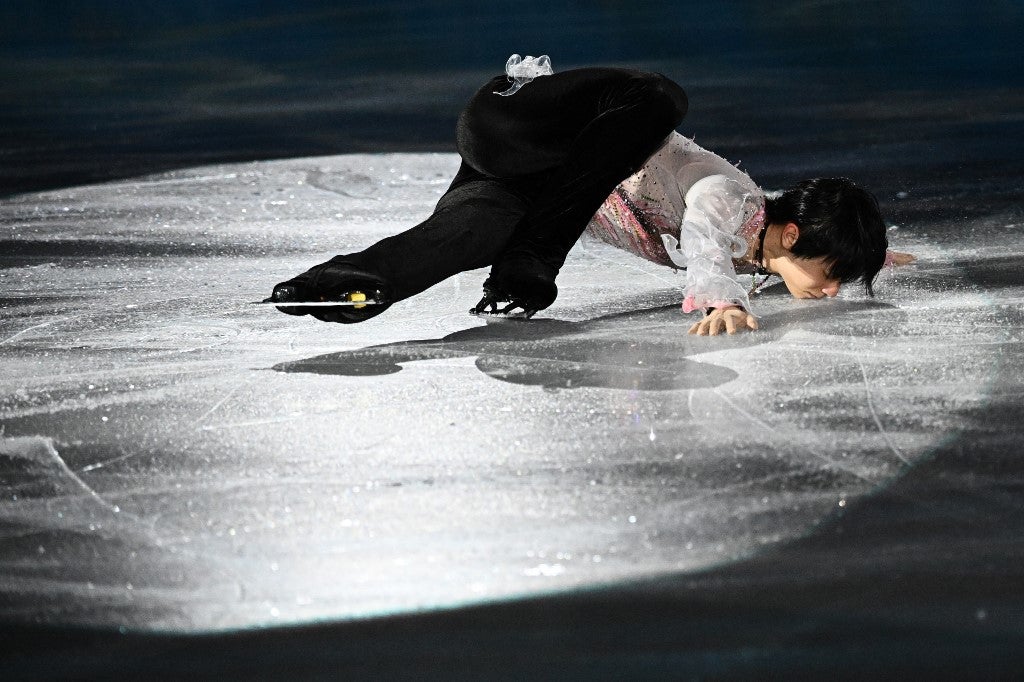 FILE–Japan’s Yuzuru Hanyu performs in the figure skating exhibition gala during the Beijing 2022 Winter Olympic Games at the Capital Indoor Stadium in Beijing on February 20, 2022. (Photo by Anne-Christine POUJOULAT / AFP)

Japan’s two-time Olympic figure skating champion Yuzuru Hanyu said he felt “no sadness” after retiring from competition aged 27 on Tuesday, bringing the curtain down on one of the sport’s most glittering careers.

The soft-spoken “Ice Prince” became the first man to win back-to-back Olympic titles in 66 years and is a national icon who is followed around the world by adoring fans.

But he said the time was right to bow out after finishing fourth at this year’s Beijing Games — where he struggled with injury — saying he was “not needed any more” in competitive skating.

“As far as competitions and results go, I think I have been able to take all the things I wanted to take,” Hanyu, dressed in a dark suit and bowing deeply as he took to the stage, told a packed press conference in Tokyo.

“I think I have grown in such a way that I don’t seek that kind of evaluation anymore,” he added.

Hanyu said he intends to keep his legion of “Fanyu” supporters happy by skating in exhibition shows, and made clear his discomfort with the idea of being considered retired.

He will no longer compete on the stage that made him one of figure skating’s all-time greats, however, adding that he would “never miss the tension of competition”.

“I’ll no longer be compared with other skaters as a competitor,” he said.

“I have no sadness. I want to continue to do my best.”

With his graceful skating style and delicate, boyish looks, Hanyu is an icon for his fans, who shower the ice with Winnie the Pooh toys after his routines.

He won his first Olympic singles title at the 2014 Sochi Games and overcame injury to retain his crown four years later in Pyeongchang.

He also won the world championships in 2014 and 2017 but he has been dogged by injury in recent years, including an ankle ligament problem that he had to overcome to win his second Olympic gold.

He was dethroned as Olympic champion in February in Beijing by rival Nathan Chen of the United States, tumbling during his routine and missing the podium. Hanyu said he had considered retiring after the Pyeongchang Olympics in 2018 but finally made up his mind after returning from Beijing.

“I thought about a lot of things at that time, and I thought I wasn’t needed anymore on this stage,” he said.

Hanyu will concentrate on skating in ice shows, where he will attempt to land the fabled quadruple axel jump that eluded him throughout his competitive career.

He said he would “work harder” so he could one day “land it successfully in front of everyone”.

Although his plans for the future are still “vague,” he said he wanted to “figure out ways to show people my skating in a way that’s more befitting of today’s age.”

“Ice shows tend to be considered something elegant and fun, but I want to remain more of an athlete,” he said.

“I want people to see me as I continue to fight.”

Hanyu is a national hero in Japan, where he became the youngest recipient of his country’s prestigious People’s Honour Award in 2018, and his every move is headline news.

But he still remains something of an enigma despite the huge attention, rarely granting interviews and having no social media presence.

He said he wanted to “continue learning”, adding that “being Yuzuru Hanyu is a heavy burden”.