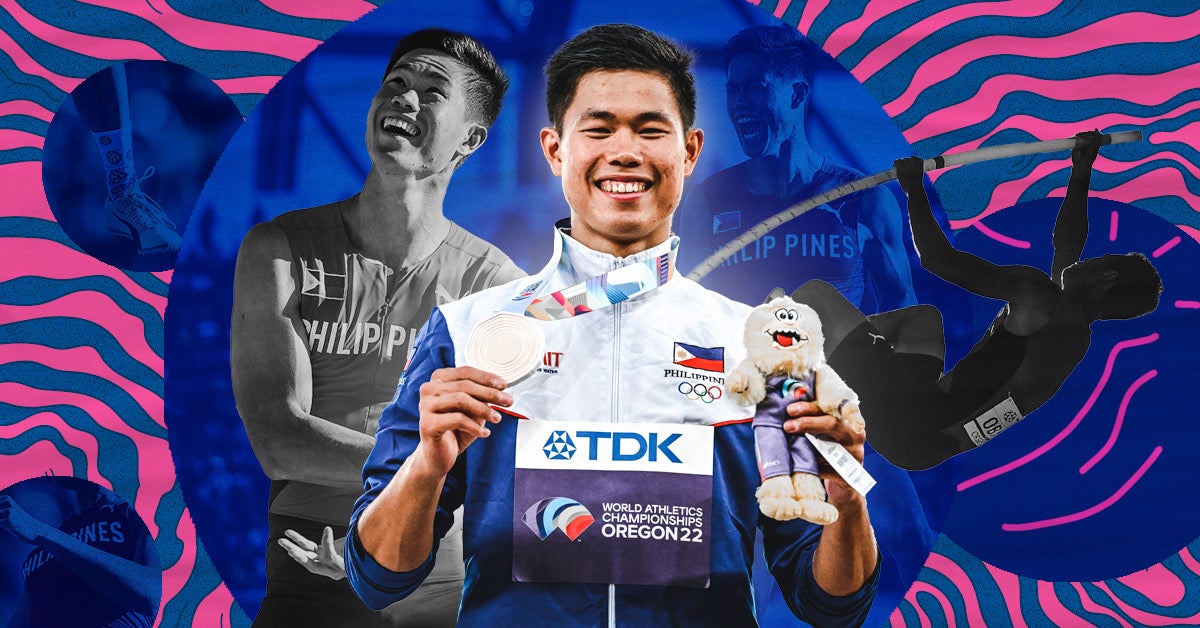 MANILA, Philippines—No other Filipino athlete has had a year quite like Filipino pole vault star EJ Obiena.

Obiena embedded his name in the record books by delivering the Philippines’ first-ever medal at the World Athletics Championships, claiming the bronze in a riveting pole vault final in Eugene, Oregon, USA.

But as hard as it is to imagine, Obiena’s historic feat could’ve easily never happened amid a tumultuous seven-month span that saw him get dropped from the national team, sidelined by COVID-19, and stopped at the US airport on his way to the worlds. 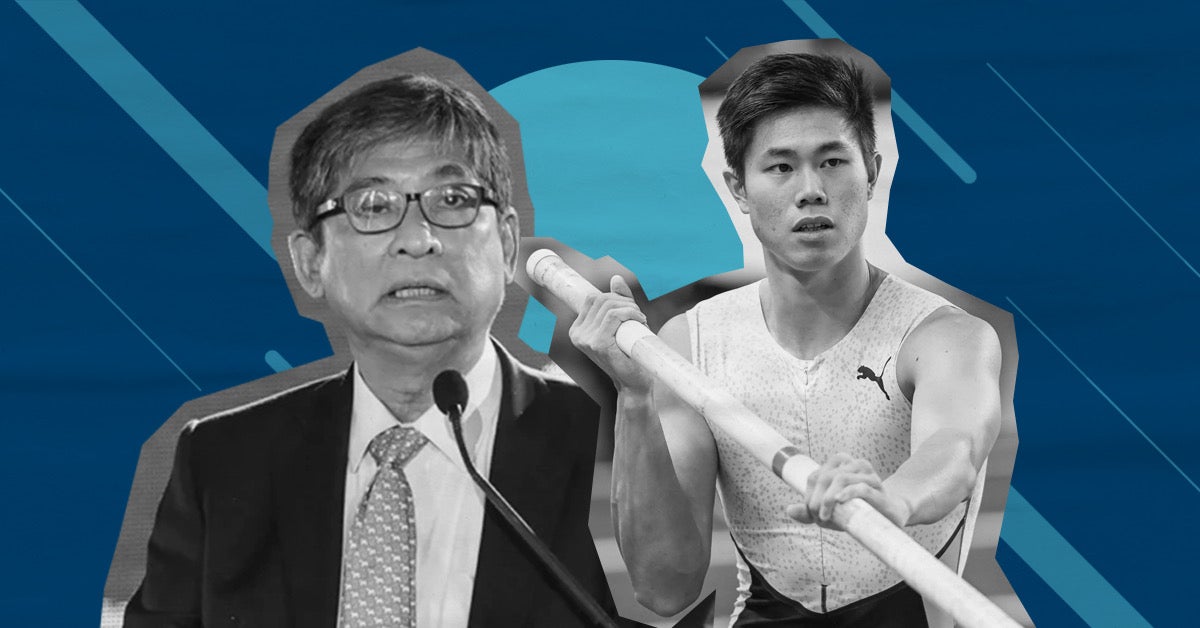 Obiena picked up where he left off to begin 2022, facing grave allegations thrown against him by the Philippine Athletics Track and Field Association (Patafa), under then-president Philip Ella Juico, over misuse of liquidation funds.

The issue dragged on for several more months, forcing Obiena to miss the World Athletics Indoor Championships in Belgrade, Serbia in March after Patafa’s exclusion of the Tokyo Olympian’s name from its list of athletes heading into the 31st Southeast Asian Games.

Days later, the Philippine Olympic Committee (POC) stepped in and included Obiena’s name on the roster for the SEA Games.

Obiena and Patafa finally reached a settlement after a successful mediation led by the Philippine Sports Commission (PSC) on March 30.

Less than a month after the two camps mended ties, Obiena released a copy of a Credit Notice from the Commission on Audit (COA) that served as his “closure” from the dispute with his mother federation, which is now under the leadership of Agapito “Terry” Capistrano after Juico stepped down last month.

The notice, dated March 31, 2022, stated the liquidation of his training funds amounting to P12,324,114.40 were “in order and that we have not issued any Notice of Suspension nor Notice of Disallowance.”

The clearance also couldn’t have come at a better time with Obiena set to defend his title in the SEA Games in Hanoi, Vietnam in May. Despite the distractions, Obiena kept winning.

He won his first gold of the 2022 season on February 12—a month after undergoing successful knee surgery—in the Orlen Cup in Poland with a height of 5.81 meters.

In less than two weeks, Obiena pulled off an encore in the Orlen Copernicus Cup again at 5.81m.

Still in the face of adversity, Obiena managed to reset his own national indoor record at 5.91m to win the silver at the Perch Elite Tour in France on March 6. With the Patafa mess out of the way, things continued to look up for Obiena.

Obiena was named flagbearer of the Philippines in the SEA Games.

A cinch to win the gold in the regional meet, Obiena easily met expectations by retaining his SEA Games crown on May 14 while another Filipino Hokett Delos Santos claimed the silver.

Back in the European circuit, Obiena followed up his successful SEA Games bid with another gold in the L’Aquila leg of the European City of Sports in Italy on May 30.

There seemed to be no stopping Obiena from winning until he caught a case of COVID-19 in June and missed a couple of tournaments.

Obiena was supposed to take part in the Bislett Games in Oslo, Norway and Paris Diamond League later that month.

After regaining his full strength, Obiena was back at it like he never left, collecting the gold with a 5.92m leap at the Taby Stavhoppsgala in Sweden on June 29 and then proceeded to put up another golden performance four days later at the Jump and Fly in Germany.

Of all the medals Obiena has won so far this year, there was nothing bigger than his only bronze.

The 26-year-old Obiena became not just the only Filipino to win a medal of any color in the World Championships, he was also the first one to make a final in the biennial competition.

Obiena finished third after sailing through his highest clearance yet at 5.94m which also reset the Asian mark he established last September in Austria.

But Obiena nearly came close to potentially missing the competition due to an immigration mishap when he arrived in the United States from Italy on July 7.

Obiena was reportedly detained by the US Department of Homeland Security for over 12 hours on suspicion of escaping felony charges in the Philippines.

“It was an unfortunate incident to be held in detention without fully understanding the basis. It definitely threw me off a bit,” said Obiena. 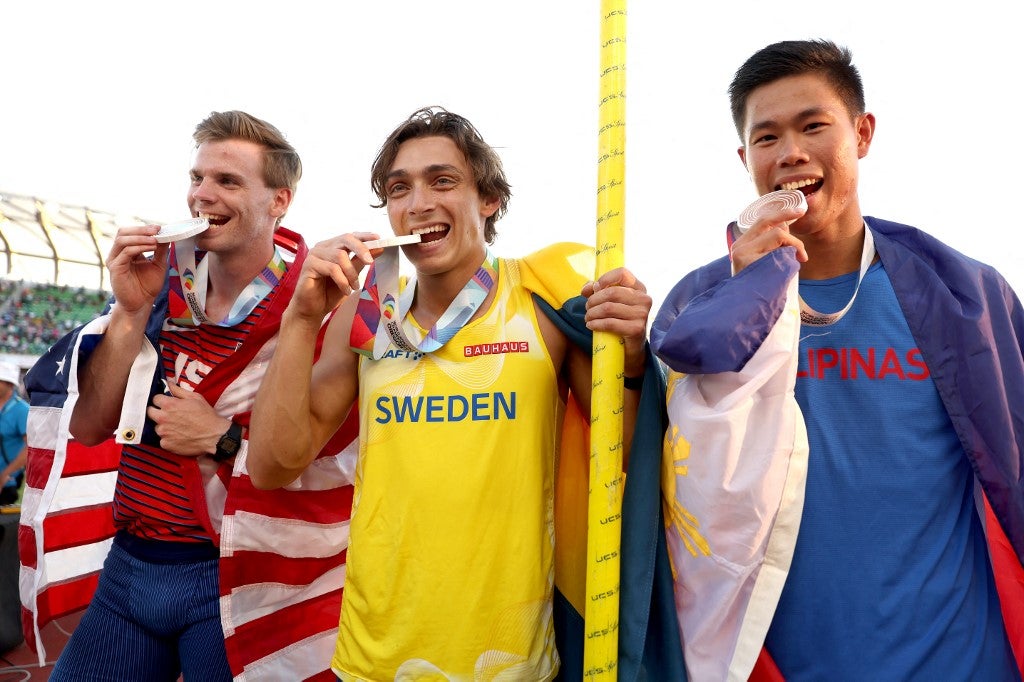 Silver medalist Christopher Nilsen of US, gold medalist Armand Duplantis of Sweden and bronze medalist EJ of Philippines celebrate after competing in the Men’s Pole Vault on day ten of the World Athletics Championships Oregon22 at Hayward Field on July 24, 2022 in Eugene, Oregon. Christian Petersen/Getty Images/AFP

Obiena doesn’t have that much time to celebrate his recent win with another major competition on the way.

He’s set to compete on August 6 in the Diamond League in Chorzow, Poland where the likes of Duplantis, Nilsen and other top pole vaulters in the world await.

There’s also the SEA Games in Cambodia in May of next year where Obiena is keen on capturing a third straight gold medal.

Four months later, Obiena will have his shot at winning his first gold at the Asian Games, which will be staged in September in Hangzhou, China.

But as early as now, Obiena has his sights set on the Paris Olympics.

Qualifying for the Games won’t seem to be a problem for the ever-improving Obiena, who is now ranked third in the world as of July 28.

Expectations are higher than ever for Obiena following his bronze finish at the worlds.

In his maiden Olympic campaign in Tokyo, Obiena placed 11th in the men’s final after failing in his three attempts at 5.80m.

But a lot has changed since and Obiena has come a long way.

“I think it (World Championships bronze) just solidified what I already know and capable of which is competing with the best in the world,” Obiena said.

“Definitely, I just proved to myself that I can compete with these guys and I can win.”

Just several months ago, Obiena’s future with the national team was in limbo.

But all is in the past now with a vindicated Obiena solely focused on what lies ahead for his flourishing career.

“You know, there’s a lot of things that happened this year and I keep telling everyone who’s asking me I didn’t know at the start of the year if I was gonna be here, I didn’t know if I’m gonna be able to compete, I didn’t even know if I can represent the Philippines,” he said.

“My approach is to really just to move forward. Now, I’m very thankful for what transpired and now I’m very happy COA shared their findings with the public and that’s much appreciated. I want to thank COA for that and I just want to move forward.”

In his own way, EJ Obiena adds to unmatched stretch of PH successes