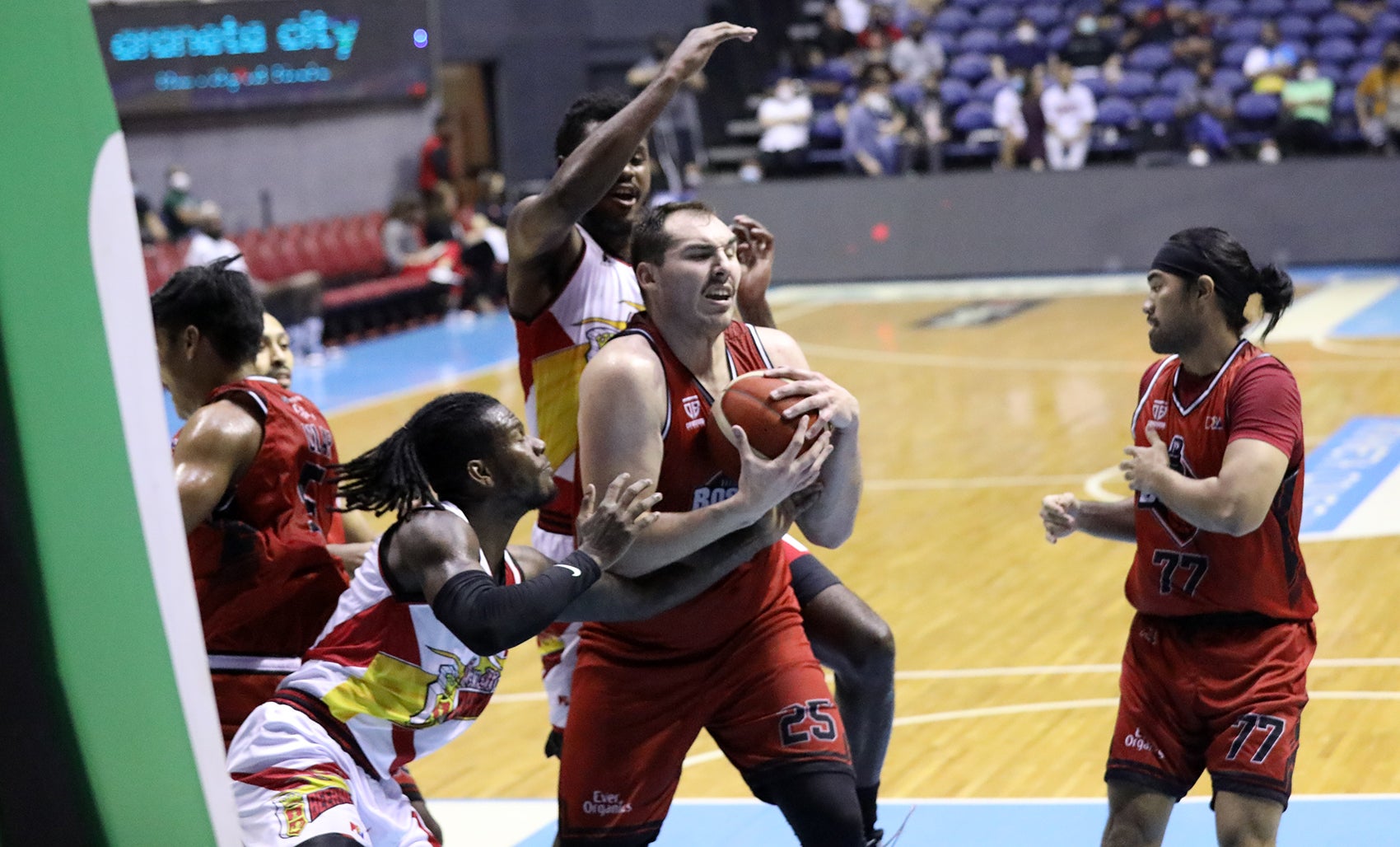 But that wasn’t the only upset he caused.

After sending the Beermen’s bid for a second Grand Slam jewel off to a bad start on the back of a herculean effort from Cameron Krutwig, Vanguardia voiced displeasure over being “grilled” on whether he was contemplating on an import replacement.

“[Reporters] are grilling me if Cam’s the right import,” a visibly upset Vanguardia said after the game.

“Ewan ko ba dito sa mga ‘to, gusto na agad may pauwiin (I don’t know about these reporters, they want [us] to send someone home right away),” Vanguardia added, even singling out one reporter who—he claimed—kept asking if Krutwig should be given the pink slip.

Incidentally, no story about Krutwig being a candidate for replacement had been written—at least not by writers who had questioned him about his import’s performance before. Moreover, the question was harmless as it was innocent.

Vanguardia was asked about Krutwig after the Bossing were handed a 46-point whipping by the visiting Bay Area Dragons. Krutwig showed shades of his all-around value with 12 rebounds and eight assists against the Dragons, but struggled on offense, finishing with 11 points on 5-of-16 shooting (31 percent).

Nick Rakocevic on undergoing MRI after hurting his left knee

WATCH: Import Nick Rakocevic said he will undergo MRI tomorrow after hurting his right knee during the fourth quarter of Magnolia's 94-92 win over TNT.Rakocevic got hurt midway into the payoff period after teammate Jackson Corpuz crashed on his knee (via Jonas Terrado, Philippine Daily Inquirer)

Krutwig has bounced back with a flourish since, finishing with 20 points, 18 rebounds, 10 assists and two blocks against the Beermen.

Vanguardia eventually apologized to the writer when he emerged from the locker room, but the moment had already produced an unpleasant situation because he had already aired his beef live in postgame interviews shown on television and streaming platforms.

Before excoriating reporters, Vanguardia and the Bossing were celebrating like they won a championship—for good reason.

The Bossing had taken down a Beermen squad that had to deal with a last-minute situation regarding its import.

Thirty days removed from capturing the Philippine Cup crown, the Beermen went back to the floor with last-minute signing Diamond Stone in lieu of the injured and highly-touted Thomas Robinson.

“I told my players in the huddle, this was the best time to beat San Miguel,” Vanguardia said.

Stone, who played for Meralco as a second import in the 2018 Fiba (International Basketball Federation) Asia Champions Cup in Thailand, had 20 points and eight rebounds for the Beermen.

June Mar Fajardo was impressive as usual with 23 points and 16 rebounds, but the Beermen couldn’t finish the job despite erecting a 15-point lead at one point.

Baser Amer put Blackwater ahead at 107-106 when he scored a three-point shot while getting fouled with 31 seconds left. He missed the bonus free throw but the Bossing extended the gap to three when Mike Ayonayon intercepted CJ Perez’s kickout pass and scored a layup in transition.

San Miguel tried to tie it but Marcio Lassiter and Stone missed their three-point shots as time expired and Blackwater ended an eight-game skid against the perennial contenders.