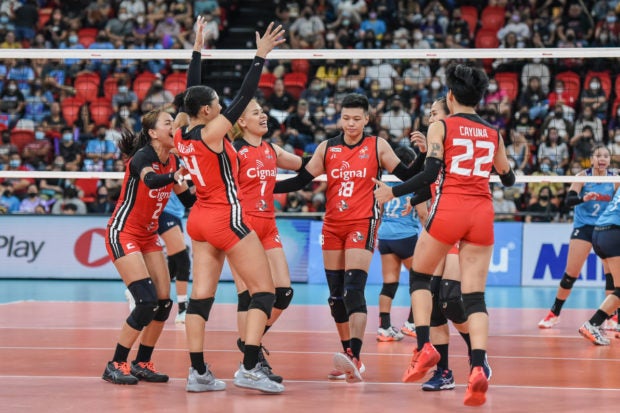 With both teams not fielding their imports to start the game, Tai Bierria came off the bench and erupted in the second set to finish with 18 points off 14 kills and four aces helping bring back the HD Spikers to the semifinals for the third straight conference with a 5-3 record in the elimination round.

Cignal completed the semifinals cast, joining Creamline (7-1), Chery Tiggo (6-2), and Petro Gazz, which was playing its last elimination game against F2 Logistics before their records will be reset for another round-robin. 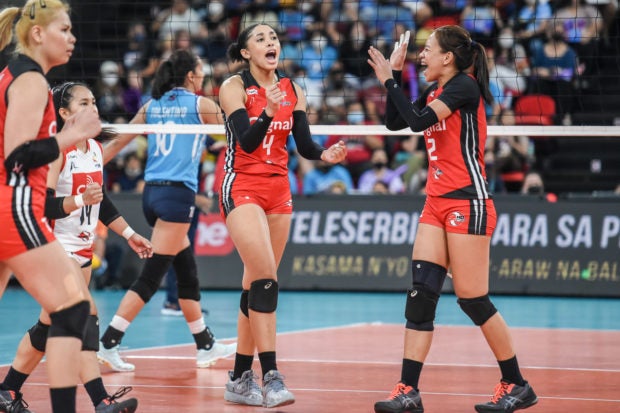 After losing the first set, Cignal coach Shaq Delos Santos bared that he told his wards that they only need two sets to advance to the semis but he still wanted his them to show their lethal form and end the elimination round on a winning note.

“I told them this is our chance, we shouldn’t let go of this opportunity. And to be honest, we have more experience than Choco Mucho. We can’t be complacent. After that they realized. The first set turned out to be a wake-up cap and my team played well in the remainder of the game,” Delos Santos said in Filipino.

The HD Spikers bucked a slow start as Bierria led her team’s bounce back in the second set, pulling away with a 23-19 lead before reaching set point, 24-20, with a block on the Flying Titans import Odina Aliyeva.

Aliyeva saved two set points with back-to-back kills, 24-22, only for Maddie Madayag to commit a costly service error that tied the match one set apiece.

Cignal’s American spiker continued to dominate in the third set as Molina and Meneses provided support. However, two players from Choco Mucho suffered injuries with Kat Tolentino hurting her right knee after trying to dig Bierria’s spike midway in the second set before Des Cheng suffered an injury on her right pinky finger, which took her out of the game with the HD Spikers leading 21-15.

WATCH: Kat Tolentino hurt her left knee after trying to dig Tai Bierria’s attack midway in the third set.She was carried by her teammates off the court. #PVLReinforcedConference2022 | via Lance Agcaoili/Inquirer Sports

Even though the game was not yet done, the HD Spikers’ gained the last semis ticket and slammed the door on the Flying Titans with Meneses nailing a quick attack to win the third set and take a 2-1 match advantage.

Tolentino returned in the fourth but Cignal dominated the set and led as many as 13 points with Deanna Wong committing an overreaching violation that pushed their opponents to match point, 24-11.

Choco Mucho ended the elimination round with a 3-5 record, missing the semis round for the second straight conference.

Cheng had 16 points built on 12 attacks and three blocks before she was taken out of the game. Tolentino had nine markers, while Aliyeva and Isa Molde added eight each, only for their team to give up 28 errors.