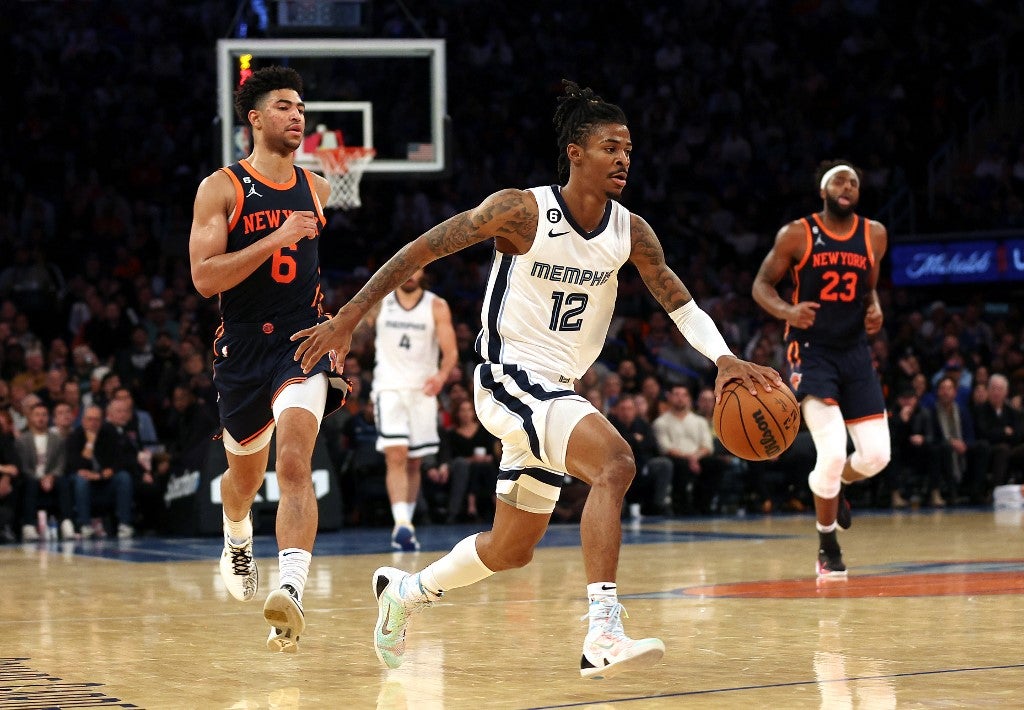 Ja Morant #12 of the Memphis Grizzlies controls the ball during the game against the New York Knicks at Madison Square Garden on November 27, 2022 in New York City. Jamie Squire/Getty Images/AFP

Ja Morant posted a triple-double and scored the go-ahead basket with 13.9 seconds left Sunday night for the visiting Memphis Grizzlies, who fended off a fourth-quarter comeback by the New York Knicks to escape with a 127-123 victory.

Dillon Brooks scored 23 points while Steven Adams (16 points, 10 rebounds) had a double-double for the Grizzlies, who have won two straight. Jaren Jackson Jr. had 21 points and John Konchar added 10 points.

Jalen Brunson mostly matched Morant down the stretch and scored 17 of his 30 points in the fourth quarter, though he missed both a potential go-ahead basket and a shot to tie the game in the final 10 seconds.

RJ Barrett scored 22 points and Julius Randle (14 points, 10 rebounds) had a double-double for the Knicks, who have lost two straight and four of five. Mitchell Robinson finished with 16 points while Cam Reddish added 11 points off the bench.

The Grizzlies took their biggest lead at 93-81 on an alley-oop dunk by Brandon Clarke with 6.8 seconds left in the third quarter. The Knicks chipped away in the fourth and took a 112-111 lead when Reddish hit a 3-pointer with 4:10 left.

Morant responded with a floater to begin a stretch in which he and Brunson combined to score 15 of the game’s next 22 points. Brunson sank a pair of free throws to give the Knicks a 123-122 lead with 26.3 seconds left.

Morant drove the lane on the next possession and had his shot blocked from behind by Robinson, but Morant never lost control of the ball and scored on the putback.

After a Knicks timeout, Brunson missed a pull-up jumper. Morant grabbed the rebound and hit the first free throw before missing the second. Following New York’s last timeout, Brunson threaded the lane, but Clarke got a hand in his face and Brunson’s shot glanced off the back rim. Jackson iced the game by hitting two free throws with under a second left.