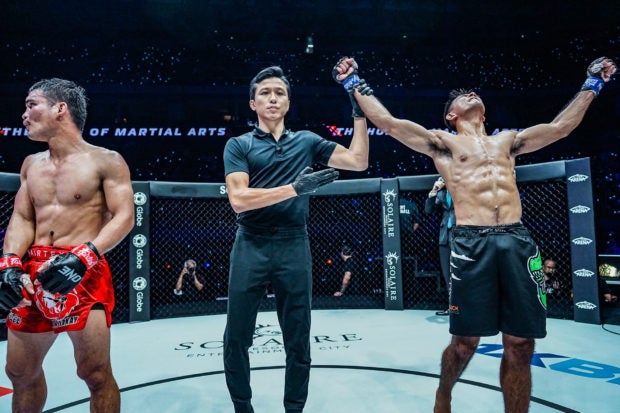 Drex Zamboanga celebrates victory in ONE: 164. –ONE CHAMPIONSHIP PHOTO

MANILA, Philippines—Drex Zamboanga continued his resurgence while Jeremy Pacatiw bounced back on Saturday.

Zamboanga notched his fourth straight win after a hard-earned unanimous decision win over Team Lakay’s Adonis Sevilleno at ONE 164 at Mall of Asia Arena.

Pacatiw, also of Team Lakay, rebounded from his knockout loss to Fabricio Andrade last February by stopping Tial Thang of Myanmar in an action-packed bantamweight bout.

“I’m very motivated because a lot of good people surround me,” Pacatiw (11-5) said.

The victory made it a double celebration for the Zamboanga siblings after Drex followed up her sister Denice’s win in the morning session.

The older Zamboanga, whose current streak came after three consecutive losses, improved to 10-5 after spoiling the debut of Sevilleno.

Your subscription could not be saved. Please try again.
Your subscription has been successful.
Read Next
Not just a pretty face: Cho Gue-sung earns fame with heroics for Korea at World Cup
EDITORS' PICK
Omega Speedmaster super racing: Tiny device massive change
vivo Philippines offers a free bouquet of flowers and a premium necklace perfect for Valentine’s Day
Fuel price rollback expected on Feb 7
Makabayan bloc blasts bid to expand US access to more military bases in PH
Philippine-United States alliance ‘rock solid’ — DFA
House energy committee chair Arroyo bats for cheap electricity
MOST READ
Vice Ganda gets called out for ‘unfair treatment’ of ‘It’s Showtime’ co-host Karylle
Fuel price rollback expected on Feb 7
Kris Aquino gets ‘renewed confidence’ after consultation with new doctor: ‘I have a strong chance of getting better’
Pokwang tells self amid revelations on past relationship: ‘Bangon, nanay ka’
Don't miss out on the latest news and information.