F1: Azerbaijan to be first of six sprint races in 2023 | Inquirer Sports

F1: Azerbaijan to be first of six sprint races in 2023 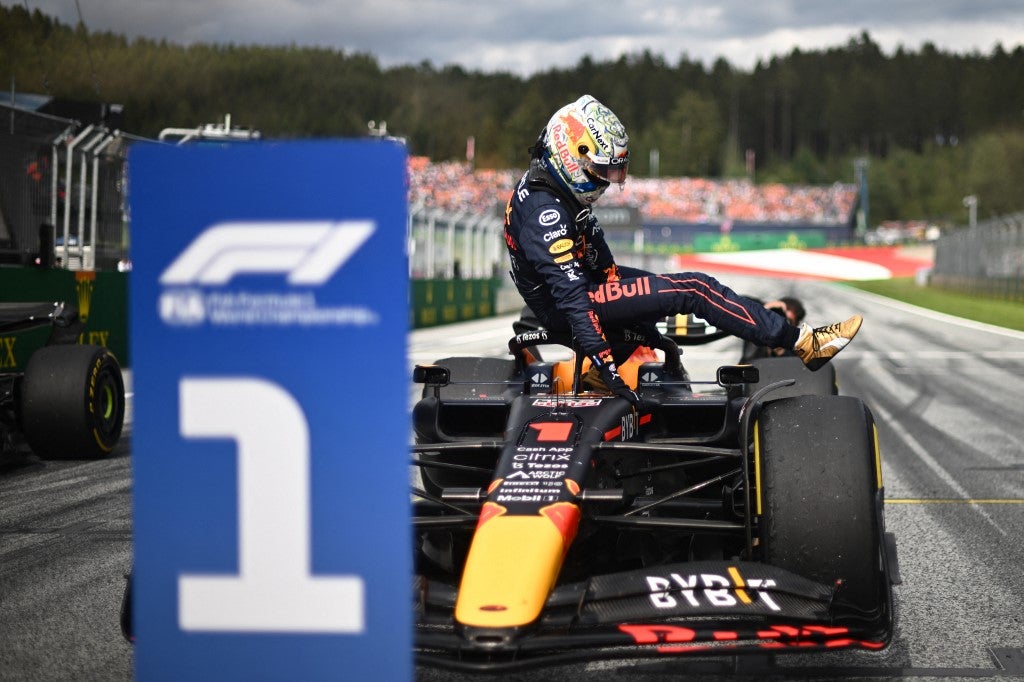 FILE–Red Bull Racing’s Dutch driver Max Verstappen climbs out of his car after winning the sprint qualifying at the Red Bull Ring race track in Spielberg, Austria, on July 9, 2022, ahead of the Formula One Austrian Grand Prix. (Photo by CHRISTIAN BRUNA / POOL / AFP)

The others will be held in Austria, at Belgium’s Spa-Francorchamps, Qatar, Austin’s Circuit of the Americas and Brazil’s Interlagos.

Baku, Spa, Qatar and Austin will be hosting sprints for the first time.

Qatar was absent from this year’s calendar due to the country hosting the soccer World Cup.

Formula One is doubling the number of sprint race weekends, with three held this year at Italy’s Imola, in Austria and Brazil.

The sprint format involves qualifying on Friday for a 100km race on Saturday, with points awarded to the top eight, that sets the grid for the main grand prix on Sunday.

Pole position is awarded to the fastest driver in Friday qualifying rather than who starts Sunday’s race at the front of the grid.

The same format will continue next year, although Formula One is considering changes for the future including turning Saturday into a stand-alone race.

Formula One said the choice of locations was based on research into which tracks offered the best overtaking opportunities, close racing and high-speed sections.

“We have seen a hugely positive reaction to the F1 Sprint events during the first two years of its running,” said F1 chief executive Stefano Domenicali.

“The introduction of the F1 Sprint has created a race weekend that includes three days of competitive racing action and brings more entertainment to fans of the sport as well as additional value for key stakeholders including teams, broadcasters, partners, and host venues.”

Baku promoter Arif Rahimov said in May that he wanted to host a sprint weekend to create more excitement.

“We’re a market where most of the fans are not as educated in the sport itself so when you say that we have two races…that will definitely increase the attendance on a Saturday and give them more value for money,” he said then.

“I’m a big proponent of it. I really like the idea. I think it’s good just to mix things around a little bit throughout the years. Things get boring and people just get too used to the same format and then they lose their interest.”