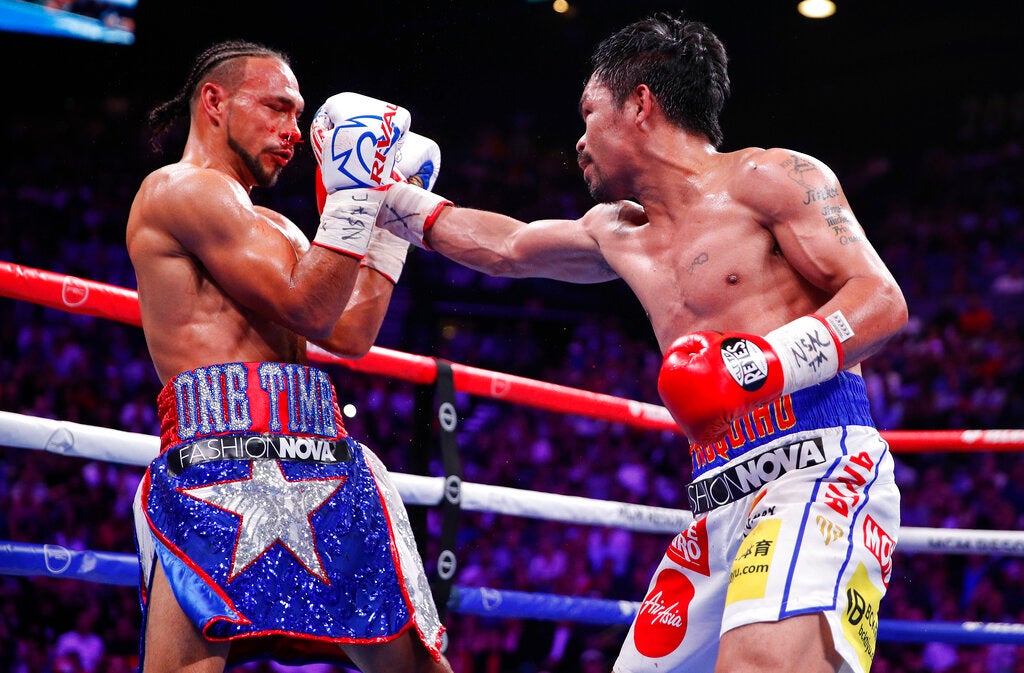 Manny Pacquiao, right, lands a punch against Keith Thurman in the fifth round during a welterweight title fight Saturday, July 20, 2019, in Las Vegas. (AP Photo/John Locher)

Manny Pacquiao had just faced three rounds of a fiery rally by American rival Keith Thurman, who was deadset on changing judges’ minds after being floored in the first round.

Thurman hadn’t won a round until the sixth and was on the verge of taking the 10th when Pacquiao halted his foe’s momentum with a body shot that practically sealed the victory for the Filipino.

While going after Thurman’s body was the plan of Team Pacquiao all along, the Filipino’s corner got a reminder to stick to strategy from the unlikeliest source—according to corner chief Buboy Fernandez. Floyd Mayweather at ringside for Pacquiao-Thurman. Photo by Mark Giongco

The revelation is expected to fuel even more speculation that the recent social media spat between American Floyd Mayweather Jr. and Pacquiao could be a means to generate buzz for a rematch between the noted boxing rivals.

It’s working: #MayPac2 has been trending since Mayweather accused Pacquiao of riding on the “Money” train for relevance.

Fernandez said the assist from Mayweather’s unidentified “messenger” came in the eighth round.

READ: Pacquiao to Mayweather: Want fans to stop asking for rematch? Then fight me again

By Fernandez’s account, it appeared Mayweather was trying to make sure Pacquiao won the fight. Mayweather walked out of MGM Grand even before the winner was announced.

Mayweather later fired an opening salvo on Instagram by saying his name often dropped when Pacquiao’s name is mentioned in the news.

READ: Floyd Mayweather: Manny Pacquiao built his legacy off association with my name

Pacquiao begged to disagree, saying it was Mayweather who was in attendance in his past two fights.  The Filipino senator then called Mayweather out for a rematch if he wants to “be relevant again.”

The American, who retired unbeaten after 50 fights, countered by saying he was there as “an employer” as he owns a stake in the promoting Premier Boxing Champions.