England’s Harry Kane celebrates scores their second goal with teammates during the Euro 2020 semifinal vs Denmark on July 7, 2021. Pool via REUTERS/Laurence Griffiths

LONDON— England and their long-suffering fans finally have the chance to add another trophy to the 1966 World Cup after they overcame Denmark 2-1 in extra time on Wednesday to reach the European Championship final for the first time.

Harry Kane’s goal, following up after his penalty had been saved, finally saw off battling Denmark to set up a Sunday showdown against Italy, also looking to shake off the ’60s as they seek to win the title they last lifted in 1968.

On a night to remember in front of almost 60,000 roaring fans, England fell behind to Mikkel Damsgaard’s superb free kick, equalized with an own goal, dominated the game and then won it via their captain, albeit somewhat unconvincingly, in the 104th minute.

“Unbelievable – what a game though,” said Kane. “We dug deep and we got there when it mattered. We reacted really well – we’re in a final at home, what a feeling.”

It was of course a particularly special night for coach Gareth Southgate, whose penalty shoot-out miss sent England out of the semi-finals of Euro 96. “We said to the players at some point we’re going to have to show resilience and come back from setbacks, and we did that tonight,” he said.

“The most pleasing thing is that we’ve given our fans and our nation a fantastic night and the journey carries on for another four days. We’ve said we want to create memories I’ve said to the young ones ‘it isn’t always like this.”

It was a tough way for Denmark to end its emotional ride from the fear and distress of Christian Eriksen’s opening game collapse to its first semifinal since its shock Euro 92 win, but its exhausted players left Wembley with socks rolled down but heads held high.

“I am proud of this group and everyone who has been on this journey. It has been fantastic to be involved. I am hungry and empty, but I am also proud,” said Pierre-Emile Hojbjerg. 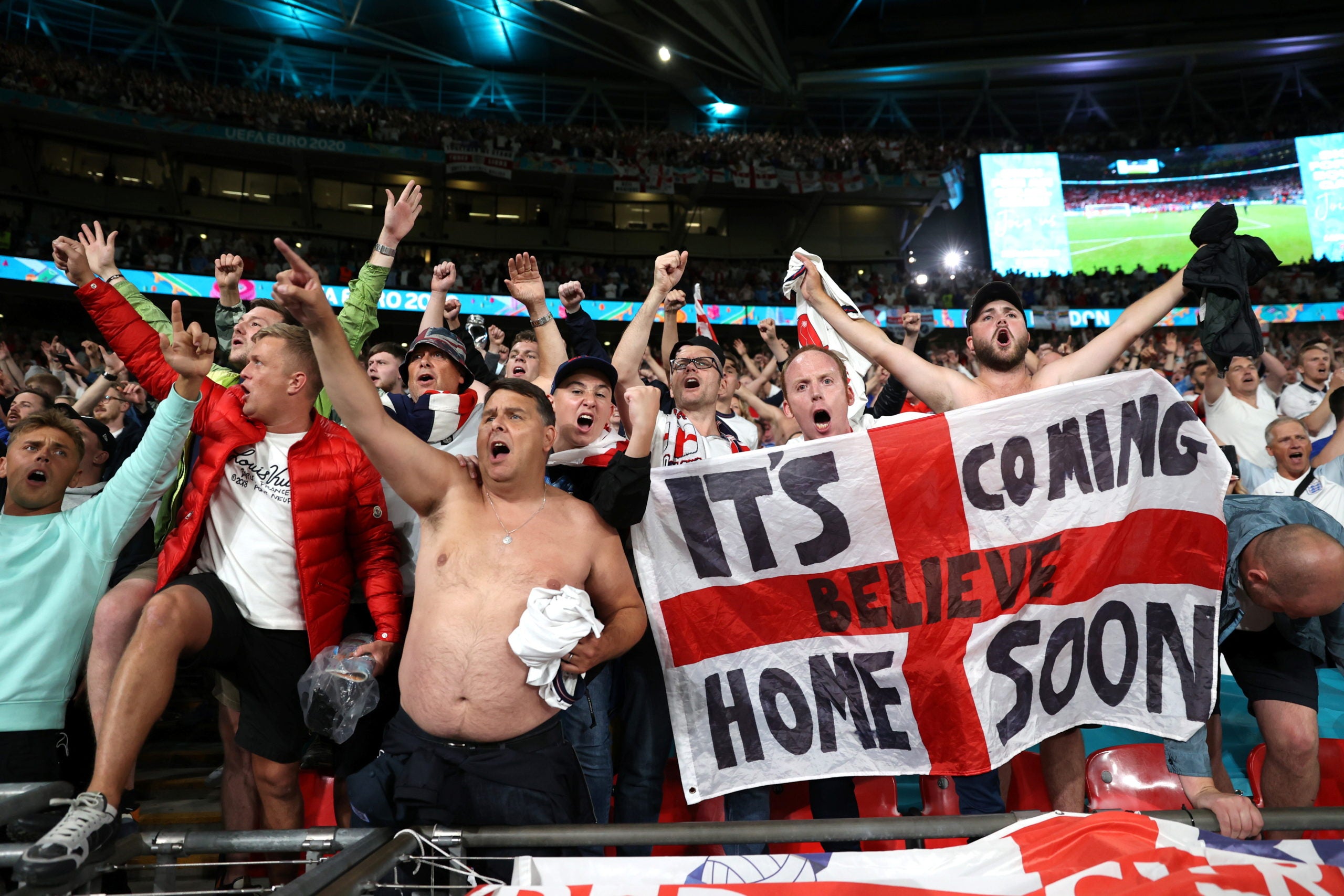 England fans celebrate after the match the country’s win in the Euro 2020 semifinal on July 7, 2021. Pool via REUTERS/Carl Recine

Having swept past Ukraine 4-0 in the quarter-finals, England knew they faced a considerable step up on Wednesday and the quality in the Danish ranks was amply illustrated after 30 minutes when Damsgaard fired a powerful, dipping 25-yard free kick over the wall and beyond the diving Jordan Pickford.

England had reached the semis without conceding a goal and the crowd were stunned. The question of how England would respond to its first real setback would now be addressed.

The answer was calmly and patiently, as they passed their way back into the ascendancy. Raheem Sterling was denied at point-blank range by Kasper Schmeichel before the 39th-minute equalizer, when Bukayo Saka hit the byline and fizzed over a low cross that Simon Kjaer bundled over his own line in his attempt to stop the ball reaching Sterling.

Schmeichel was on hand again with an excellent diving save to palm away a Harry Maguire header and England began to turn the screw in the second half, but, despite their relentless passing and probing around the box, they struggled to carve out a clear opening and the match rolled into extra time.

The extra 30 minutes became a virtual attack v defense exercise, as Schmeichel saved again from Kane and Jack Grealish and the fear of penalties began to rise among the home fans.

The ever-dangerous Sterling continued to drive into the box though and was eventually brought down by Joakim Maehle for the VAR-reviewed penalty that Kane struck poorly and Schmeichel blocked, only for the captain to tuck home the rebound.

England then negotiated the last 15 minutes to spark the loudest, and surely most confident rendition of “Football’s Coming Home”, ever to ring around Wembley.

“When you’ve waited as long as we have to get through a semifinal, the players – considering the limited international experience some of them have – have done an incredible job,” Southgate said.

“We suffered in Moscow (in the 2018 World Cup semifinal defeat by Croatia) on a night like this and we’ve managed to put that right. It’s an incredible occasion to be a part of. The fans were incredible all night. There was mayhem on the pitch and I was part of it. We’ve got to enjoy the fact we’re in the final but there’s one more massive hurdle to conquer.”