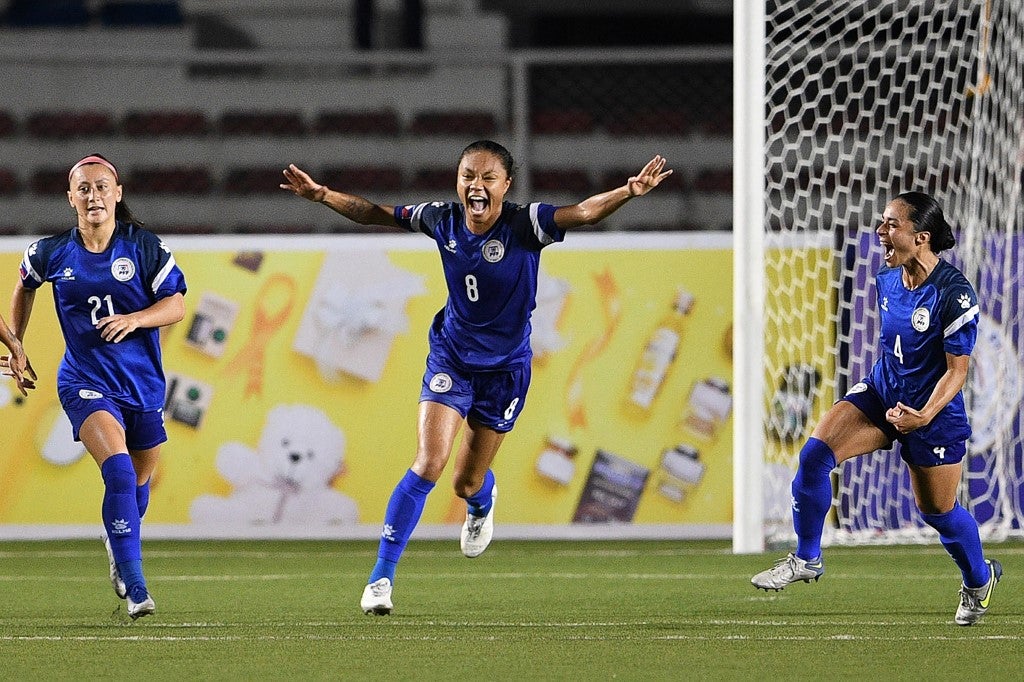 Philippine players celebrate a goal against Vietnam during the Women’s Asian Football Federation (AFF) semi-final match at the Rizal memorial colliseum in Manila on July 15, 2022. (Photo by Ted ALJIBE / AFP)

MANILA, Philippines–Sarina Bolden is beyond grateful with the number of fans who have come to show their support throughout the course of the Asean Football Federation (AFF) Women’s Championship.

But the top goalscorer of the competition would like to see the figures reach new heights on Sunday when the Filipinas take a crack at their first-ever title in the regional championship against Thailand at Rizal Memorial Stadium.

“The numbers have been growing, and I absolutely love it,” said Bolden. “And I hope it continues to grow in this final, championship game.”

Expectations for the title match set 7:30 p.m. on Sunday is that the attendance would reach past the tournament-record of 3,233 fans set during the Philippines’ 4-0 upset of dethroned champion Vietnam.

“It’s amazing,” said coach Alen Stajcic of the crowd that showed up to cheer the Filipinas against the regional queens. “The players feel that love and the more love there is, the better they are going to perform [against Thailand in the final].”

The first meeting between the Philippines and Thailand during the final matchday of Group A last Tuesday saw a crowd of 2,923, most of them ending up disappointed after the hosts fell 1-0.

Bolden and Stajcic have been urging for more support ever since the start of the competition, and the latest number coupled with the performance on the pitch have prompted more supporters to heed their call.

SM Tickets on Saturday began issuing tickets for those who want to witness the championship match, with the lower grandstand being sold for P500, lower grandstand at P400 and bleachers at P200.

The bleachers section could still put fans in a unique atmosphere, with the festive supporters group known as “Ultra Filipinas” leading the cheers from that area.

ers from that area. There was no mistaking the effect of the crowd during the semifinal, with roaring cheers providing Bolden and her teammates an added jolt of energy that helped fashion the stunning rout.

“It’s electric when you’re playing out there,” said Bolden. “It’s hard playing against the home crowd, we definitely know that experience playing in the SEA Games against Vietnam.

“But when you have that home crowd, it’s the greatest feeling.”