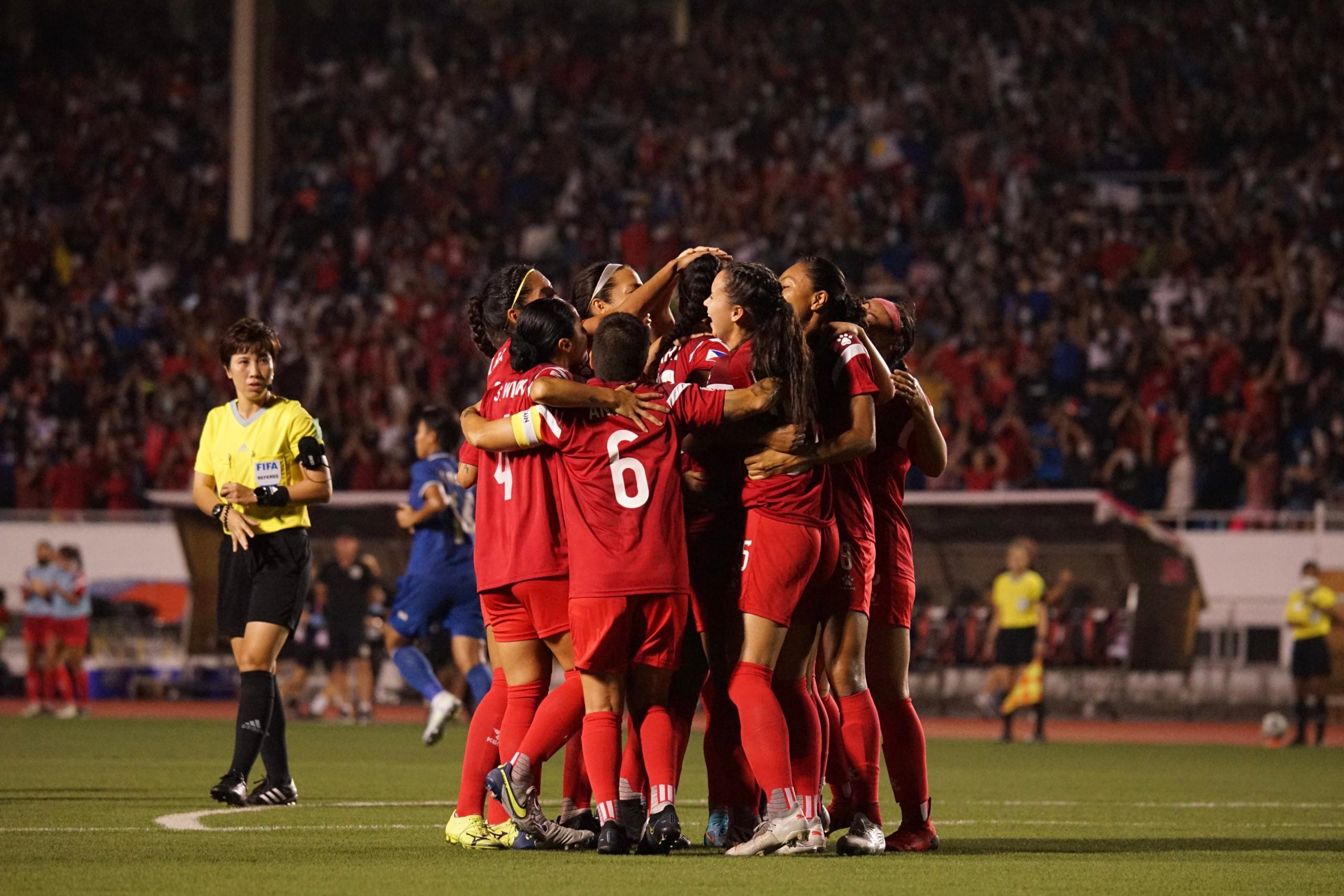 MANILA, Philippines–The lady footballers known as the Filipinas got a big audience they had hoped for since the start of the AFF Women’s Championship, and they repaid those who came by lifting a silverware on Sunday night.

Behind a pair of goals inside the first 20 minutes, the Philippines captured the regional championship for the first time following a 3-0 victory over Thailand inside Rizal Memorial Stadium that became a madhouse.

Jessika Cowart’s header off a set piece and Katrina Guillou’s goal from close range jolted the crowd of 8,257—a record to cap off two weeks of international women’s football.

Sarina Bolden, the tournament’s top scorer with eight, added a third which was the cherry on the sundae as chants of “Ole!” and “Campeones!” reverberated throughout the fabled sports complex.

The crowd later flashed their cellphone lights, creating a unique atmosphere to mark the moment that once again allowed the Filipinas, who earlier in the year qualified for the World Cup and took home the bronze medal in the Southeast Asian Games, to once make history.

Or some say, herstory.

It was a sweet win for coach Alen Stajcic’s side, which saw its hopes of ruling the tournament put in doubt when Thailand sneaked a 1-0 win at the close of the group stage.

But known for defying the odds ever since securing a World Cup at the start of 2022, the Filipinas would oust defending champion Vietnam in the semifinals before completing their payback over the Thai squad known as the Chaba Kaew.

And there seems to be no limits for the group of women which has captured the imagination of local football and sports fans.

Tickets were in high demand ever since the semifinal triumph, and it showed before kickoff when the grandstand and three-fourths of the bleachers section were filled, something that was not seen since their men’s counterpart the Azkals enjoyed shortly after the “Miracle in Hanoi” back in the 2010 AFF Suzuki Cup.

The championship, however, will create higher expectations for the Filipinas as they continue to prepare for next year’s Fifa showcase which Australia and New Zealand are hosting.

Thailand settled for a second straight runner-up finish as its bid to regain back the crown immediately slipped away.

The Filipinas took advantage of getting the first corner and Cowart delivered a header seven minutes after the referee blew her first whistle, igniting a roar of jubilation from their mostly red-clad supporters.

Guillou doubled the lead in the 19th when she slipped past Thailand goalkeeper Chotmanee Thongmongkol from close range.

Bolden, perhaps establishing herself as the team’s talisman and arguably fan favorite, completed another magical night at Rizal Memorial with an 88th minute header off a corner.

Stajcic hails Filipinas’ ‘best ever’ performance in upset of Vietnam