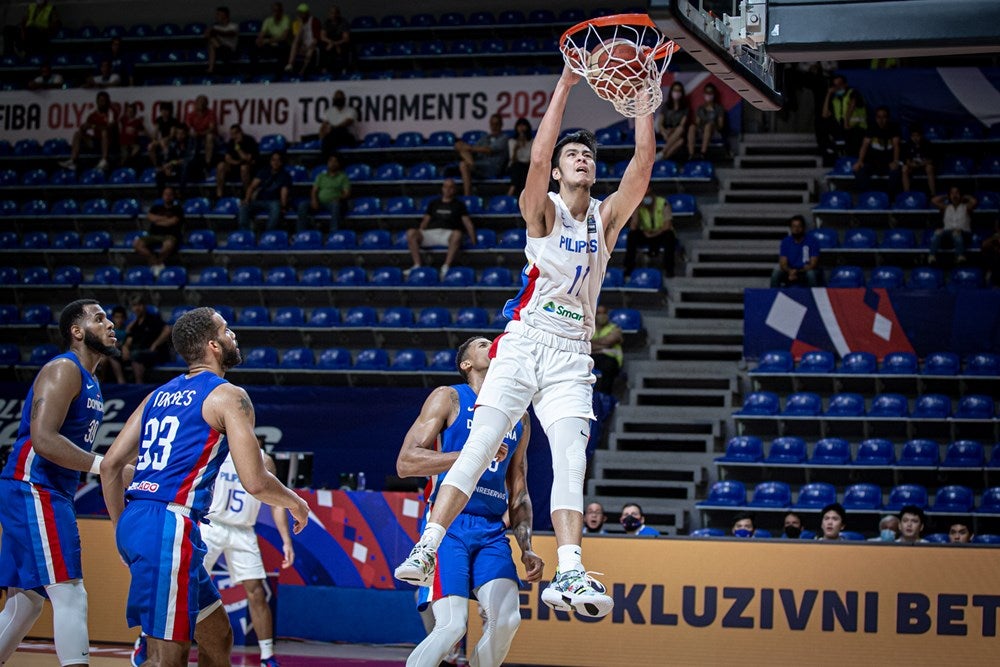 FILE–Kai Sotto scores on a dunk against the Dominican Republic —PHOTOS COURTESY OF FIBA.COM

MANILA, Philippines—Kai Sotto may not be suiting up for Gilas Pilipinas in the upcoming Southeast Asian Games in Hanoi, Vietnam but he is part of the national team’s long term plans.

Sotto’s name was not included in the the men’s basketball pool for the SEA Games and Samahang Basketbol ng Pilipinas said there are no plans of including him the last minute.

There is high hopes, however, that Sotto will be able to rejoin the Philippine team in other international events especially the 2023 Fiba World Cup hosted by the country.

“As far as the SEA Games is concerned, no [he will not be included]. If he’s part of the big picture? Of course, he is,” said Gilas Pilipinas team manager Butch Antonio in the Philippine Sportswriters Association Forum on Tuesday.

Sotto just wrapped up his first season in the National Basketball League with the Adelaide 36ers and he announced on Thursday that he will be applying for the 2022 NBA Draft.

Sotto had a promising maiden season in the NBL averaging 7.5 points, 4.5 rebounds and 0.8 blocks in 23 games for the 36ers, who finished in seventh place and missed the playoffs.

The 7-foot-2 center appeared in Gilas’ pair of games against host Serbia and Dominican Republic in the Olympic Qualifying Tournament in Belgrade last July.